Symptoms of Contaminated Engine Oil in Your Car

Symptoms of Contaminated Engine Oil in Your Car

Engine oil is essential for your vehicle’s smooth running. It is a viscous fluid that keeps your engine lubricated, preventing friction between the engine’s internal components. All manufacturers have recommendations on when to get an oil change and the type of oil for the engine’s optimal performance and longevity.

The oil begins to wear down after an extended period of use. Although newer engines tend to travel longer mileage before requiring an oil change, most engines require an oil change after 3,000 miles or 3 months.

Over time, the oil picks up ash from your engine’s cylinder walls and collects contaminants as it cycles through the engine. Dirty engine oil affects the proper lubrication of your engine, causing significant engine wear.

The wear down of your engine oil is further accelerated by a worn-out engine or bad oil filters. When the engine oil is compromised, you may notice some of the following symptoms:

While it is normal for your engine oil to become contaminated over time, leaving it unchanged could damage your engine. Therefore, you should conduct routine oil changes for the smooth performance and longevity of your engine.

Since the engine oil is always working to lubricate and keep the engine cool, it could get contaminated for various reasons. The contaminants usually result from the ash on the walls of the engine cylinder, metal particles and specks of dirt that mixes with the oil as it cycles through the engine.

At McIlvain Motors, we are highly 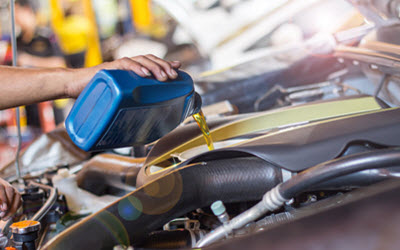 confident you will find our service thorough and precise. Our well-trained technicians are equipped with the latest factory tools and equipment to carry out a routine oil change or filter replacement.

If you reside in Tempe, AZ or the surrounding areas of Chandler, Mesa, Phoenix, and Scottsdale, please call or visit our shop today to schedule your next service appointment.