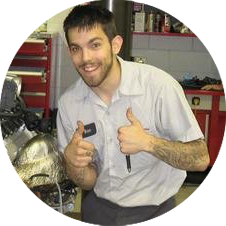 Ben was born and raised in Rhode Island where he attended Motoring Technical Training Institute for automotive technology after graduating from Barrington high school. Ben spent the next 5 years at a Boston area Porsche Audi dealership before relocating to Arizona in 2009. Since moving to a warmer climate, Ben has continued to work on his three favorite car manufacturers, Porsche, Audi and Volkswagen. In his spare time Ben regrets selling his India red 964 C4 and enjoys target shooting and riding motorcycles.